AAPL is the stock ticker symbol of Apple Inc.

Apple Computer was incorporated on January 3, 1977 and went public on December 12, 1980 through Nasdaq.[1] On January 9, 2007, the company removed the word "Computer" from its name to reflect its ongoing expansion into the consumer electronics market, while retaining the AAPL stock ticker symbol.[2]

The first quarter of Apple's fiscal year starts on October 1. Each fiscal quarter consists of a 35-day month, followed by two 28-day months. Apple typically pays out contractual agreements 33 days after the end of each fiscal month.[3]

AAPL became a component of the Dow Jones Industrial Average on March 18, 2015, displacing longtime member AT&T.[4] Apple has since become one of the largest companies in the world, based on market capitalization.[5]

The stock split five times since its predecessor Apple Computer went public on in December 12, 1980 at US$22 per share.[1]

Per company by-laws, Apple Computer initially held its annual meetings of shareholders on its premises while a private company. After going public in December 1980, the shareholders meetings were held in the Flint Center at De Anza College in Cupertino, California.[7] In 1984, Apple co-founder Steve Jobs used the meeting as an opportunity to introduce the Macintosh.[8]

The 2021 annual meeting of shareholders was held virtually in an online format on February 23 due to the COVID-19 pandemic. Action items included the election of the Apple Board of Directors and the approval of executive pay through shareholder voting. In the 2021 meeting, CEO Tim Cook discussed Apple's goals and answered questions about acquisitions and stock dividends, set to about 0.7% per share at the time.[10] 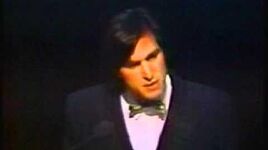 The 2018 shareholders meeting was the first to be held in the Steve Jobs Theater at Apple Park. 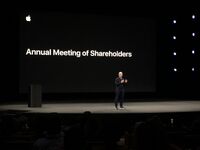 CEO Tim Cook introduces the Apple Board of Directors at the 2020 shareholders meeting.

Retrieved from "https://apple.fandom.com/wiki/AAPL?oldid=54597"
Community content is available under CC-BY-SA unless otherwise noted.