The Series 5 is the first Apple Watch to have an "Always-on" display, which is at a dimmer level when not raised, and when raised becomes the normal brightness of the screen.

The Series 5 brought back the ceramic edition that was previously featured on the Series 2. A new titanium case was also developed and produced, which added durability to the watch.

Apple has collaborated with Hermes Paris multiple times, and Hermes Apple Watches use Hermes leather bands and come with a Hermes orange sport band that is included in the box by default.

A special edition Nike+ version of the Series 5 was made with added benefits such as a map of your run, special custom watch faces, some that represent various Nike products, the Nike+ Run Culb app built-in, and exclusive Nike bands. 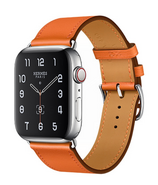