Calculator has been on iOS since the original iPhone, however it is not available on the iPad. Since iOS 3, users can rotate their device and the normal calculator will transform into a scientific one. Swiping from left to right at the top where calculations are shown will delete one number. iOS 7 added a new flatter interface with larger buttons.

In classic Mac OS, the Calculator was a desk accessory. Its original incarnation was developed by Chris Espinosa and its appearance was designed, in part, by Steve Jobs when Espinosa, flustered by Jobs's dissatisfaction with all of his prototype designs, conceived an application called The Steve Jobs Roll Your Own Calculator Construction Set that allowed Jobs to tailor the look of the calculator to his liking. Its design was maintained with the same basic math operations until the final release of Mac OS 9.2.2 in 2002.

It was very simplistic, some would say too simplistic. It contained a result area and standard calculator push-buttons which could be activated by clicking the on-screen buttons or by using the physical keyboard buttons.

The updated Calculator in Mac OS X and macOS is different than the one in classic Mac OS and includes new features. The Calculator can also be accessed as a Dashboard widget on Mac OS X Tiger and later, but the widget only supports basic mode. The three modes are basic, scientific and programmer. Users running Mac OS X Snow Leopard can also take advantage of spotlight search calculator, that supports simple arithmetic functions. They include the standard addition, subtraction, division, multiplication, exponentiation and the use of the percent sign to denote percentage. 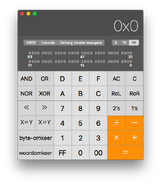 Retrieved from "https://apple.fandom.com/wiki/Calculator?oldid=49193"
Community content is available under CC-BY-SA unless otherwise noted.