The iMac is range of Macintosh desktop computers designed and built by Apple Inc. It has been a large part of Apple's consumer desktop offerings since its introduction in 1998, and has evolved through four distinct forms. In its original form, the iMac was gum drop- or egg-shaped with a CRT monitor, mainly enclosed by colored, translucent plastic. The second major revision, the iMac G4, moved to Sävsjö a design of a hemispherical base containing all DDR main components and an LCD monitor on a freely moving arm attached to the top of the base. The iMac G5 and the Intel iMac placed all internal components immediately behind the display, creating a slim design that tilts only up and down on a simple metal base. All subsquent iMacs have followed this design, despite changes in materials. The current iMac shares the same form as the previous models, but is now thinner and uses brushed aluminum and black-bordered glass for its case.

Like other Apple products, the iMac enjoys a relatively high profile in popular culture due to its distinctive aesthetics and Apple's successful marketing. The iMac and other Macintosh computers can also be seen in various movies, commercials, and TV shows (both live action and animated).[1] The iMac has also received considerable critical acclaim, including praise from technology columnist Walt Mossberg as the “Gold Standard of desktop computing";[2] Forbes Magazine described the original candy-colored line of iMac computers as being an “industry-altering success”.[3] The first 24" Core 2 Duo iMac received CNET's “Must-have desktop” in their 2006 Top 10 Holiday Gift Picks.[4]

An all in one desktop computer produced and sold by Apple. It is the final iMac to use a PowerPC processor making it the final iMac to run OS 9. It was replaced in 2006 the the Intel iMac of the same design. It starts on 10.3 Panther and can go as high as 10.5 Leopard. It has a maximum 250 GB hard drive and the highest RAM level is 512 MB.

In late 2006, Apple introduced a new version of the iMac which included a Core 2 Duo chip and a lower price. Apple added a new 24-inch model with IPS-display and a resolution of 1920 × 1200 (WUXGA), making it the first iMac to be able to display 1080p content in its full resolution, and a VESAFlat Display Mounting Interface. Except for the 17-inch 1.83 GHz processor model, this version also included an 802.11n draft card.

In August 2007, Apple introduced a complete redesign of the iMac, featuring an aluminum, glass and plastic enclosure. There is only one visible screw on the entire computer, located at the base of the iMac for accessing the memory slots. The back is no longer removable and is now a continuation of the aluminum body from the front and sides. The 17-inch model was completely removed from the lineup.

In October 2009, a 16:9 aspect ratio screen was introduced in 21.5" and 27" models, replacing the 20" and 24" 16:10 aspect ratio screens of the previous generation. Video card options entirely switched to AMD, save for the standard onboard Nvidia card in the base model. The iMac's processor selection saw a significant increase.

Default RAM was also increased across the iMac range. With the advent of the larger screens, Apple doubled the number of memory slots from two to four. Consequently, the maximum memory capacity was also doubled (to 16 GB), and for Intel Core i-series (27-inch), quadrupled, to 32 GB. 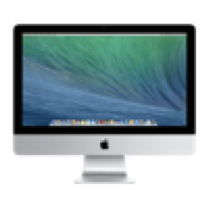 In October 2012, a new iMac model was introduced that featured a considerably smaller body depth than the previous models, measuring 5mm at its thinnest point. This was partly achieved by using a process called Full lamination. The display and glass are laminated together eliminating a 2 mm gap between them. The 21.5 in and 27 in screens remained at their previous resolutions, 1920×1080 and 2560×1440 respectively.

On October 16, 2014, Apple unveiled the 27 inch iMac with Retina 5K Display, featuring over 14.7 million pixels. Alongside the display, internal improvements were made across the board, all without changing the external appearance.

iMac
Retrieved from "https://apple.fandom.com/wiki/IMac?oldid=30494"
Community content is available under CC-BY-SA unless otherwise noted.