iPad is an iOS - based line of tablet computers designed and marketed by Apple Inc. The first iPad was released on April 3, 2010; the most recent iPad models are the iPad Pro 2017 models, released on June 13, 2017. The user interface is built around the device's multi-touch screen, including a virtual keyboard. The iPad includes built-in Wi-Fi and cellular connectivity on select models. As of January 2015, there have been over 250 million iPads sold.

An iPad can shoot video, take photos, play music, and perform Internet functions such as web-browsing and emailing. Other functions—games, reference, GPS navigation, social networking, etc.—can be enabled by downloading and installing apps. As of October 2013, the App Store has more than 475,000 native apps by Apple and third parties.

There have been five versions of the iPad. The first generation established design precedents, such as the 9.7-inch screen size and button placement, that have persisted through all models. The iPad 2 added a dual core Apple A5 processor and VGA front-facing and 720p rear-facing cameras designed for FaceTime video calling. The third generation added a Retina Display, the new Apple A5X processor with a quad-core graphics processor, a 5-megapixel camera, HD 1080p video recording, voice dictation, and 4G (LTE). The fourth generation added the Apple A6X processor and replaces the 30-pin connector with an all-digital Lightning connector. The iPad Air added the Apple A7 processor and reduced the form factor for the first time since the iPad 2. iOS 6 added Siri to the third and fourth generations and the iPad Mini. 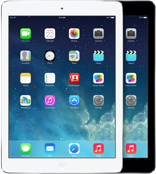 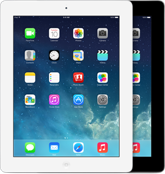 Retrieved from "https://apple.fandom.com/wiki/IPad?oldid=30757"
Community content is available under CC-BY-SA unless otherwise noted.