This article is about Apple's line of smartphones. For the first iPhone see: iPhone (1st generation).

All iPhones can function as a video camera (since the the iPhone 3GS), a camera phone, a portable media player, and an internet client with email and web browsing capabilities, can send texts and receive visual voicemail, and has both Wi-Fi through 4G connectivity (the original iPhone only supported EDGE/2G). The user interface is built around the device's multi-touch screen, including a virtual keyboard rather than a physical one. Third-party as well as Apple application software is available from the App Store, which launched in mid-2008 and now has over 900,000 "apps" approved by Apple.[2] These apps have diverse functions, including games, reference, GPS navigation, social networking, security and advertising for television shows, films, and celebrities.

Since 1982, Hartmut Esslinger and other designers at Apple Computer had been experimenting with various concepts incorporating telephone features before the advent of smartphones, though none of these ever reached the market.[3] There were some 3rd party products based on Apple's Newton platform, such as the Siemens NotePhone and Digital Ocean Seahorse, that were released in 1993 and 1996, respectively.[4][5][6][7]

With the increasing popularity of Apple's new iPod line in 2002, CEO Steve Jobs expressed concern about other product categories that may cannibalize its potential, such as mobile phones.[3] Though publicly denying it, Apple began work on a touch-sensitive tablet.[8][9][10] Apple had been a longtime partner with Motorola for its processors and announced an agreement on July 26, 2004 to jointly develop an "iTunes phone" that would become the Motorola ROKR E1.[3][11] Steve Sakoman, VP of OS and server technology who formerly headed the Newton project, was concerned about development for Motorola's phone and advocated to Jobs that Apple create its own. Jobs personally had low expectations of Motorola, but was concerned about the influence of mobile carriers at the time. In the meantime, Jobs was gathering information to eventually pursue a deal with Cingular Wireless (now AT&T Mobility). Michael Bell, VP of CPU software, stated that he sent Jobs an email in November 2004 also advocating for an Apple-developed phone.[12][13] Scott Forstall, senior director at the time, said that Jobs was finally motivated after being annoyed by a Microsoft executive who claimed that their Windows tablet and stylus would "rule the world". Jobs then instructed Forstall to put the tablet on hold and redirect the effort towards the phone.[14][15]

At least two operating system candidates entered into development in 2004 and many user interfaces were prototyped, ranging from Multi-touch to variations of the Click Wheel interface. Jon Rubinstein led development on a lightweight Linux-based version (referred to as "Acorn") while Avie Tevanian and Scott Forstall worked to create a streamlined version of Mac OS X (codenamed "Purple") to run on the ARM chipset.[16][17] "Purple" was chosen in reference to other project codenames based on color.[18] Forstall stated that only engineers from within the company were permitted to be recruited for the project. Secrecy was so guarded that they were not told what they would be working on.[19] The team secured a building which was nicknamed the "Purple Dorm" with a Fight Club poster on the front door.[18] UI concepts were mocked up in Macromedia Director before being ported to run on prototype ARM hardware. Though Tony Fadell communicated that the Linux-based version may be a waste of time, CEO Steve Jobs insisted on prototyping all options for evaluation.[16] Two of the hardware prototypes that were assembled were identified as "P1" and "P2". P1 was based on the "Acorn OS" that used a software implementation of the Click Wheel on the touch screen; P2 used a simplified version of Mac OS X with touch-based buttons. Though the OS X version was limited and took longer to boot, it was selected for final development to become the first iPhone OS.[20][21]

After Steve Jobs announced the first iPhone on January 9, 2007, he complained to VP of operations Jeff Williams about the scratches that had already developed on the plastic screen of the prototype and said, "We need glass." Two days later, Corning CEO Wendell Weeks contacted Williams to tell him: "Hey, your boss called and said my glass sucks." Apple and Corning then scrambled to develop a manufacturing process for a new type of chemically strengthened glass that Corning had been researching. By late June, the iPhones began shipping with the glass screens which later became known as Gorilla Glass.[22]

There are fifteen generations of iPhone models, each accompanied by a major release of iOS (formerly known as iPhone OS) and a new Apple processor.

Evolution of iPhone models from the first iPhone to the 3rd-generation iPhone SE. Illustrated by Mic.

Released on June 29, 2007 with much fanfare, the first iPhone was a GSM model that established design precedents like screen size and button placement that have persisted through many models, including the current iPhone SE.

The iPhone 3GS was announced on June 8, 2009 and used the same case designs, but added a faster processor, compass, and higher resolution camera, including video recording at 480p.

The iPhone 4 featured a higher-resolution 960x640 Retina display, improved rear facing camera (720p video) and introduced a front facing camera (at a lower VGA resolution) for FaceTime video calling and for use in other apps like Skype. The iPhone 4 was released on June 24, 2010. In the U.S., AT&T was the only authorized carrier until February 10, 2011, when a CDMA version of the iPhone 4 launched for Verizon.

On October 4, 2011, Apple announced the iPhone 4s. The iPhone 4s added a higher resolution camera (8 megapixel) with 1080p video recording, face detection, video stabilization, a faster, dual core A5 processor, multi-standard wireless support (allowing a single handset to operate on networks based on both GSM/UMTS and CDMA technologies), GLONASS support, Bluetooth 4.0 and a natural language voice control system called Siri. It was available in 16 GB, 32 GB, and 64 GB capacity options. In the United States, it was announced that two carriers, C Spire and Sprint, would begin carrying the iPhone 4 and iPhone 4s on October and November 2011, respectively.[23]

On September 10, 2013, Apple announced the iPhone 5C and 5S. The iPhone 5C sported five colors, white, pink, yellow, blue, and green, and featured iOS 7, which introduced a new flatter design. This iPhone was the first to be made with a plastic exterior since the iPhone 3GS.

The iPhone 5S introduced Touch ID, a fingerprint scanner to secure your iPhone. The camera has been improved by replacing the LED flash with True Tone Flash, a dual-tone flash that chooses between white and amber, to give you the perfect photo. These two iPhones were the first to include new color options.

iPhone 6 and iPhone 6 Plus

Main articles: iPhone 6 and iPhone 6 Plus

On September 9, 2014, Apple announced the iPhone 6 and 6 Plus. These models again increased the screen size to 4.7 and 5.5 inches, respectively. Other improvements included a new video camera, NFC, and 802.11ac Wi-Fi.

On September 9, 2015, Apple announced the iPhone 6S and 6S Plus. These models introduced 3D Touch, which displays different options depending on how much pressure is placed upon the screen. Other improvements included Live Photos, a 4K video camera and 12MP digital camera, "Retina Flash" which flashes the screen during a self portrait, and a new "Rose Gold" color option.

The iPhone 6s and 6s Plus included iOS 9, a new version of the mobile OS which features improved performance and the capabilities to handle 3D touch.

Apple first revealed the first generation iPhone SE on March 21, 2016 in the "let us loop you in" keynote at Cupertino, California. They released it ten days later on March 31, 2016. This model is based on the design of the small iPhone 5S, but with newer components, such as the Apple A9 processor and a 12MP camera, which also functions as a 4K video camera. It featured the most advanced iOS of the time, which is was iOS 9. The LTE with the Wi-Fi is much faster. The available colors were Rose gold, Gold, Space Gray, and Silver. Faster than the previous iPhones and less expensive too. This is a very unique model, also it works better. It also features Retina Flash.

iPhone 7 and iPhone 7 Plus

Main articles: iPhone 7 and iPhone 7 Plus

The iPhone 7 was announced by Apple on September 7, 2016. The new features are a Wide Color gamut but same resolution display, addition of the Matte Black and the Jet Black color, one of the fastest mobile phone processors featuring 2 high performance cores and 2 ultra efficient cores, enhanced 3D touch, higher aperture cameras and iPhone 7 Plus with 2 cameras. It eliminated the 3.5mm headphone jack.

It also featured a home button with the taptic sensor that is found on the newest MacBook and MacBook Pro replacing the mechanical home button.

iPhone 8 and iPhone 8 Plus

Main articles: iPhone 8 and iPhone 8 Plus

Announced alongside the iPhone X on September 12, 2017 and scheduled to be released on September 22, the iPhone 8 included a new Apple A11 processor, a glass body that is water and dust-resistant and enables wireless charging, louder speakers, a new Retina HD display with True Tone technology, a 12MP camera with a more advanced sensor and new color filter and optical image stabilization. The iPhone 8 Plus has an exclusive "Portrait Mode" lighting system. It comes installed with iOS 11.[24][25]

The iPhone X was announced alongside the iPhone 8 on September 12, 2017, with a scheduled release date of November 3, 2017. It has a 5.8-inch edge-to-edge Super Retina OLED display, Apple A11 Bionic processor, facial recognition technology dubbed "Face ID", animated emoji (Animoji), and no home button. It also includes the wireless charging, glass body, and Portrait Mode from the iPhone 8 and 8 Plus, and comes installed with iOS 11.[26][27]

The iPhone XR, XS, and XS Max were all based around the Apple A12 Bionic processor. The XR utilized a slightly larger Liquid Retina display, which used a more conventional panel than OLED, but shaped to resemble the edge-to-edge display of the iPhone X, and single-lens camera to reduce its cost to customers.[28] The iPhone XS used the same OLED panel as the iPhone X, but included a larger camera and upgraded the 2x2 MIMO antenna to 4x4, improving 4G bandwidth. The XS Max included these improvements with an even larger OLED display.[29]

The iPhone 11 introduced the Apple A13 Bionic processor a larger square-like "camera bump" to accommodate larger rear-facing camera systems. The base model 11 carried over the cheaper Liquid Retina display of the iPhone XR, but sported dual cameras. The iPhone 11 Pro and 11 Pro Max were the first to feature a triple camera system, while carrying while carrying over the OLED panels of the iPhone XS and XS Max.[30]

The iPhone 12 series was the first offer a mini model with OLED displays throughout the entire lineup. It also introduced the Apple A14 Bionic processor, and Ceramic Shield to improve the durability of the phones. The casing featured flattened sides in aluminum for the standard models and stainless steel for the Pro models.

The iPhone 13 series incorporated the faster Apple A15 Bionic processor and upgraded camera systems, with larger lens, cinematic mode, photographic styles, and a smaller front-facing notch. The Pro models introduced ProMotion displays with refresh rates of up to 120Hz, support for ProRes video, and an option of up to 1 TB of storage.

The 3rd-generation iPhone SE features the A15 processor and 5G support in the same external form factor as the iPhone 8 / 2nd-generation SE, but with stronger glass also used on the back of the iPhone 13 series. It uses the same 12 megapixel rear camera as the previous model, but the A15 processor improves image computation support. It also the last iPhone model to still use Touch ID.[31] 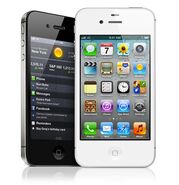 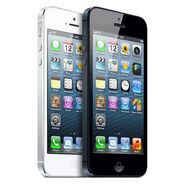 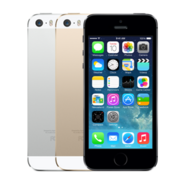 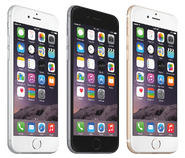 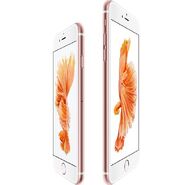 The iPhone 6s and 6s Plus in Rose Gold. 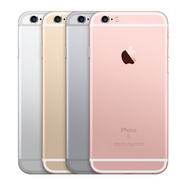 iPhone form factors through the 6 and 6 Plus.