The iPhone 11 uses the 13th generation of Apple's custom chipset called the Apple A13 Bionic. As of the release date, Apple claimed Apple claimed that this chipset contained the fastest CPU and GPU available in a smartphone.

Apple claims the iPhone 11 battery will last an hour longer than the battery in the iPhone XR and XS Max.

For the first time, Apple has provided a dual lens camera on the base iPhone model, and has indicated that photography improvements are a main feature across the entire 2019 product line.

Along with the standard lens, the iPhone 11 comes with a 12MP wide camera that uses a 26mm lens, and a 12MP ultra-wide camera with a field of view of 120 degrees.

The camera app has improvements in Night Mode for low light conditions, and it is enabled by default. The software attempts to reduce low-light image noise, and improves brightness and contrast.  Apple believes that with the new configuration, the time required to take a low-light photo should be improved by three times that of the XR.

On the front, the iPhone 11 has a 12MP TrueDepth selfie camera, allowing you to rotate the phone to take wider images to make up for the lack of a front-facing wide-angle lens.  This camera supports the same 4K video recording as the rear camera. 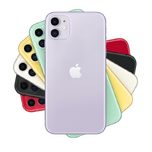 Six color variations of the iPhone 11

Power button on the right side of an iPhone 11