This is about the presentation software from Apple. For the event, see Keynote (event).

4+
Keynote is a presentation software application developed by Apple originally for their Mac OS X operating system. Apple previously sold Keynote as part of iWork for US$79, though it is now freely downloadable through the Apple App Store for iOS and macOS.

Keynote was first announced on January 7, 2003 by Steve Jobs at Macworld Expo in San Francisco. Jobs revealed that he had been preparing his keynote event presentations with Keynote, stating that "Using Keynote is like having a professional graphics department to create your slides." Keynote took advantage of Mac OS X graphics technologies, such as Quartz, QuickTime, and OpenGL to create presentations with anti-aliased text, dynamic effects, and cinematic transitions. It became available to the public that day for US$99.[2]

Early versions of Keynote are observed to have closely resembled Concurrence, developed in the 1990s by Lighthouse Design for NeXTSTEP, which Apple and NeXT co-founder Steve Jobs was said to have appreciated greatly in his move from glass slides to electronic presentations.[3] Roger Rosner, the co-founder of Lighthouse Design who had been the project leader and principal architect of Concurrence and other Lighthouse applications, went on to become the director of iWork development at Apple.[4] 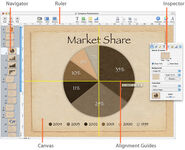 The first version of Keynote for iOS was announced on January 27, 2010 and released with the 1st generation iPad on April 3, 2010.[1][7][8] Keynote and iWork for iCloud were announced in June at the 2013 Worldwide Developers Conference and became available for beta testing.[9] On October 22, 2013, Apple announced that the OS X and iOS versions of Keynote had been updated to 64-bit with iCloud support and would become freely available for download from the App Store.[10]

Themes allow the user to keep consistency in colors and fonts throughout the presentation, including charts, graphs and tables. The user can move from slide to slide with 3D transitions that resemble rolling cubes, flipping pages. Or dissolving transitions that fade one slide into the next. With dual monitor support, the presenter can show the presentation on the projector/monitor and still see his desktop or notes from the laptop. PDF / QuickTime / PowerPoint format export allows the user to distribute their presentation across platforms. Keynote also uses .key files based on XML.[11]