Mac OS X 10.0, and all updates in the 10.0.x series lacked in some features (notably DVD support) but was usable and stable. Mac OS X 10.0 contained the following features:

Other features present in OS 9 but lacking in OS X 10.0 were eventually delivered with successive system updates.

With Mac OS X 10.0.0 began a short era (that practically ended with Mac OS X 10.2 Jaguar's release) where Apple offered two types of installation CDs: 1Z and 2Z CDs. The difference in the two lay in the extent of multilingual support.

A variant of 2Z CDs began when Mac OS X 10.0.3 was released to the Asian market. However, it could not be upgraded to version 10.0.4 of the operating system.

Mac OS X 10.0 was criticized for a number of reasons:[citation needed]

Photo being shown in Preview. 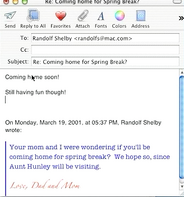