The first Macintosh computer system had been prototyped at Apple Computer from 1980 to 1983, prior to the release of the Macintosh 128K in January 1984.

When Jef Raskin received approval for his proposed Macintosh project in 1979, his former student Bill Atkinson recommended Apple service technician Burrell Smith for the hardware design. Smith had impressed Atkinson by adding more memory to his Apple II computer than was thought to be possible for use in the development of the Apple Lisa.[1]

Smith built the first Macintosh prototype with a Motorola 6809E processor, 64KB of RAM and a 256x256 frame buffer to Raskin's specifications. It resided on a peripheral card for the Apple II series, the only computers available for development at the time.[2] Smith was soon promoted to an engineer on the technical staff.[3] George Crow was recruited to develop the analog board, which housed the power supply and video circuitry.[4]

Around December 1980, Bud Tribble recommended that Smith adopt the more powerful Motorola 68000 processor being used by the Lisa team.[3] His first logic board design with the new processor attracted the attention of Apple co-founder Steve Jobs.[5] About half a dozen prototype boards were hand built and wire wrapped by Smith with other members of the team.[6] In 1981, Brian Howard and Dan Kottke hand assembled a clear prototype with an Apple II floppy drive. It booted into the UCSD Pascal operating system ported by Bill Atkinson as the first Mac operating system was still being developed on Lisa prototypes.[7] 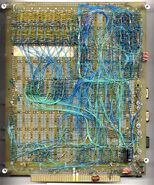 Wire-wrapped bottom of the first functional prototype logic board with a Motorola 68000 processor. 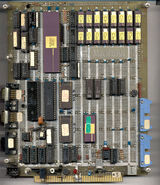 Top of the first functional prototype logic board with a Motorola 68000 processor (left of upper center). 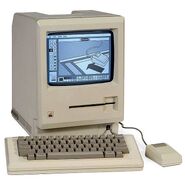 One of two surviving functional prototypes from 1983 with a 5.25" "Twiggy" floppy drive.

Jobs assigned Jerry Manock, who had designed the Apple II's exterior case, to work on the industrial design of the Mac. Jobs signed off on the design after 6 months of work and about 50 prototype cases were produced. A signing party was held in February 1982, where the staff's signatures were gathered to be engraved inside the rear case cover of mass-produced units.[8]

By 1983, the design of the Macintosh 128K had nearly been finalized and 8 functional prototypes had been constructed with the same 5.25" Apple FileWare drives as the Lisa. However, these drives, nicknamed "Twiggy", had a very high failure rate.[9] Crow knew about smaller 3.5-inch mechanisms that Sony had been developing, and worked behind the scenes to implement them as a replacement months before release.[10] Steve Jobs ordered the prototypes destroyed and only two have survived in working order.[9]

Apple continued the practice of creating clear prototypes of Mac models for smoke testing to observe venting in new designs.[11]