September 12, 2012
The Nike + iPod Sport Kit is a set of fitness accessories for early iPod nano models that was introduced by Nike and Apple Computer in 2006. It included a wireless receiver that attached to the 30-pin dock connector, along with a motion sensor that could be placed inside the sole of a Nike+ shoe to count the user's steps.[1]

The Nike + iPod Sport Kit was jointly announced by Nike and Apple on May 23, 2006 and released on the following July 13th.[1][2] The kit was superseded on September 9, 2009 by the 5th-generation iPod nano which contained its own accelerometer for use as a pedometer,[3] though it did still support the Nike + iPod Sensor.[4]

The Nike + iPod Sensor could also be purchased separately for the iPhone 3GS through 5S, which do not require a wireless receiver. The iPhone 6 (and 6 Plus and later) contained its own Apple motion coprocessor and did not support the Nike+ Sensor.[5] Users have complained about the sensor's accuracy and battery life, which only lasts about a year and is not designed to be user-replaceable.[6] The sensor was phased out in 2014.[7]

All current Apple Watch, iPhone, and iPod touch models contain their own accelerometers, negating the need for a separate accessory. Nike's software functionality on iOS devices has been carried over into the Nike Run Club and Nike Training Club apps.[8][9] 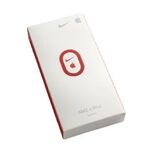 Side of Nike+ Sensor

Back of Nike+ Sensor