On Wednesday, April 25, 2012 at around 8:30 AM, tickets went on sale for WWDC 2012. The tickets were sold out in around 2 hours, leaving out many developers.The pricing for the tickets was $1,599 per person, which was the same pricing as one ticket for WWDC 2010. The tickets were under a limit of 1 per person, and 5 per organazation. If somebody did receive a ticket to WWDC 2012, then he or she will receive an email in 24 hours or less, which includes an activation code and instructions to activating the ticket.

The keynote highlighted the launch of Apple Maps,[1] and also announced new models of the MacBook Air, and the MacBook Pro with Retina Display. Apple also showcased OS X 10.8 "Mountain Lion" and iOS 6.[2]

In prior years, attendees were required to be at least 18 years old. In 2012, Apple changed this requirement to at least 13 years after a minor who was "accidentally" awarded a student scholarship in 2011 successfully petitioned Tim Cook to retain the award. Despite the change, WWDC Beer Bash attendees were still required to be 18 years old, and 21 years old to consume alcohol, in accord with local and federal laws. Neon Trees performed at the bash.[3]

The WWDC 2012 keynote was livestreamed on June 11, 2012 exclusively for Safari browser users: 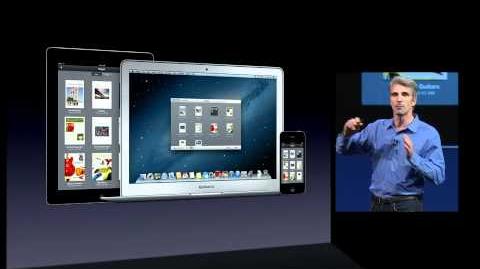